“Faeries, come take me out of this dull world, For I would ride with you upon the wind….”

Our world is diverse, not only with the obvious diversities among humans such as race, socio-economic status, religion, language, and cultures, but also in the diversity in the unseen worlds. Several years ago the spirits told me that we see less than 1% of our surroundings, and quantum physics posits that our perceptions of energy are even smaller and that we are aware of less than .001% of our surroundings. In other words, we are blind to most of the context in which we live. There are dimensions and realities that we share on the earth that are as developed and comprehensive as our own natural world and there are diverse “other” beings that live among us.

One of these mysterious worlds is the faery realm, the hidden folk, or people of the Shea (pronounced Fay). In the early 1990’s I saw a documentary on Iceland and the residents of this country who hold beliefs in the faery realm. The documentary included interviews with the president of Iceland, teachers, road workers, city planners, and country folk. The Icelandic culture is steeped in their beliefs in faeries and their respect in sharing the land with this mostly invisible culture.

Before housing developments, highways, roads, malls or other structures are built on open land, survey crews take note of where faery villages are located and either move them or go around them so as not to disrupt or destroy the faery habitat. The documentary did not go into an in-depth explanation of how the villages are identified; however, it was implied that the Icelandic culture knows how to do this. I was intrigued with the documentary and how this culture taught about the faeries in school, featured them in newspaper articles, and had a widespread acceptance of the faerie kingdom. The president himself stated that of course he believed in faeries.

During my many years as a shamanic practitioner and teacher, the faeries have been instrumental in my work and my play. Making the decision to open the door of the truth to this realm, I have then allowed there to be interaction. “I’ll believe it when I see it” is a statement of limitation and contributes to the perception of blindness to the greater mysteries of existence. We make a choice of how open we will be to possibilities and one of those choices is to decide “I’ll see it when I believe it.” New realities emerge in direct proportion to our willingness to imagine and to dream—our access to the places of alternate realities. The spirits have often said that if a person just suspends their disbelief that new realities can present.

Faeries can be found anywhere. They are not limited to pristine natural environments, although these locations are often full of faery activity. If you are a city dweller you can find faeries in parks, in your yard, or in other natural settings and you can invite them to present. Classically, faery rings, which are circles of stones, can be constructed with the intent that you would like to interact and the rings invite this realm into your life.

My first induction into this world of faeries was the result of a dying tree in my yard. The nursery that I used came out to diagnose the blight I saw on the tree and I was told that the tree had a virus that would not only cause the tree to die but would spread throughout my yard, killing many plants. It was recommended that I destroy the tree, dig up a majority of my yard, and dispose the effected soil. This was devastating news to me as my gardens are my pride and joy. I don’t even have grass in my front yard but have landscaped it with gorgeous flowers and trees.

I remembered a story that my friend Tom Cowan had told. Tom is a renowned Celtic shaman and I have taken several classes from him. Celtic shamanism has many traditions steeped in faery lore.   Tom told a story that involved a tree he was trying to save from dying (Elm’s Disease I believe) and how he had invoked the faery realm to help. Remembering this story gave me the incentive to try something similar. I decided to create a faery ring around the tree with a circle of stones. I then journeyed to the faery realm and asked the faeries to help. In exchange, I committed to make daily offerings to them, which included singing to them. The faeries use the essence of energies to keep their world strong and vital. Since the faery realm is based on music, joy, and beauty, the essence of these things can be used as vital life force. The faeries always require an exchange for services much like we do in the human realm. With this in mind I hung tiny wind chimes in the tree and adorned it with other special decorations. Faeries love beauty and cleanliness and shiny things so it is always good practice to pay attention to the circle and maintain it in good ways.

At LightSong School of 21st Century Shamanism and Energy Medicine we have a number of songs that are designated “faery songs.” We often sing them with the intent to send powerful life force to this realm. It was these songs that I sang each day to my personal faery ring. I never treated the tree with harsh chemicals to kill the virus nor did I try to cut out the black bark that was a result of the virus. Almost the entire lower half of the tree was discolored and black. Yet soon, a new growth appeared not at the top of the tree but around the base. This new growth started to encase the weakened areas of the tree. It was obvious that the tree was being “helped” for the growth was out of the norm of tree growing patterns. For years I would show people the miraculous change in the tree and tell the story of the faery doctoring that the tree received. Now almost twenty years later there is no evidence of the damage to the tree and the story needs to be taken on faith. I realized this when Tom was visiting last spring and I wanted to show him the results of his teaching that summoned the faeries that we both admire and love. I still keep the sacred stones and regularly tend the faery ring. The faeries have become a major ally for me entrusted with my most precious prayers and concerns.

I have many great stories of faery interaction including one involving a friend of mine. Robin was on a trip to Scotland with Tom Cowan and the intent of the trip was to travel to famous Celtic sites and conduct ceremonies. One of these sites is a faery glen that is famous for faery interaction. Robin attended more for the sake of his wife Colleen, who was studying shamanism, and he had only a minor interest in the topic of faeries. Robin reluctantly decided to participate in the designated activity and he took his rattle out into the glen. He was immediately altered and felt a strong directive coming from somewhere. He was told to “clean up the glen.” He could feel a pull from an invisible force and hear a distinct voice directing him to go to certain places. The necessary cleanup was not obvious to others that visited the glen. Even though the faeries claim to like shiny things they don’t like metal and they don’t like a mess. Robin was directed to dig with his hands into the dirt where he would find metal scrap—objects buried in the landscape invisible to public view yet unacceptably invasive in the faery realm. Sometimes Robin would hear a comment such as, this is scaring our children or this is in our way or this is ugly. He was asked to remove the intrusive objects. He even had to dig with his fingernails into a tree to pull out a nail. His fingers bled with the effort. All in all he found 19 items, which he still has to this day. He brought them home as mementos of a magical time in the glen. From Tom’s perspective, Robin appeared to move in a trance-like fashion. Tom also saw shimmering lights in front of Robin, directing his path. Tom commented that he was fascinated when he first observed him but he had no idea what had happened to Robin or why he was behaving in such a strange way. Since that trip in 1999, Robin has had an intimate relationship with the faery realm and many magical things have happened to him and for him especially in the area of his business and prosperity. The exchange seems to be one that keeps on giving.

Shamanically speaking the faeries live in the middle world, which is the same world that we live in. They have many of the same cultural structures in place as we do, such as nurseries for the children, schools, hospitals and villages. They live in groups. They have social gatherings and conferences. Their mission is to keep the earth beautiful. They are bound to their original instructions forfeiting free will to maintain their mission. They are not all knowing like many spiritual allies are; however, they are magical, directly influence the human realm and can make things happen for us that many other spirits cannot. If you are interested in building a relationship with them, build a faery ring, sing to them, make offerings to them, and watch what happens.

Note the faery playing a flute in the photo I included. The photo was taken by my daughter of a plant in my yard.

Invocation and Intention in Shamanism and Energy Medicine 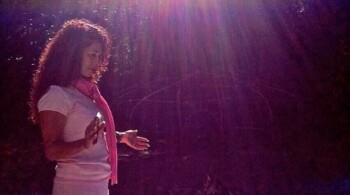 Invocation and Intention in Shamanism and Energy Medicine